Christopher first got the dancing bug when he was around 10 years old. He would watch old Michael Jackson movies and do all the dance moves when those scenes came on. His mom saw this interest and immediately put Christopher in a Hip Hop class at a local studio in Lake Arrowhead, CA. After two years of training in Ballet and Hip Hop his family found out about a studio in Redlands, CA called 5-6-7-8. While Chris continued to train in Hip Hop at the studio until the owner, Buddy Schwimmer, approached him about West Coast Swing. His response was typical for a 13 year old boy by saying, “People?! Yuck! I don’t want to touch people.” Of course the next thing to happen was his mother convinced him to take at least one class to see if it was enjoyable. Well, he took the class and loved it! It wasn’t long after that class that Buddy was able to find him a juniors partner for the 2008 US Open.

Fast forward a few years and Christopher was partners with Nicole Clonch. They first started dancing together in 2009 and concluded in 2015. At the 2012 and 2013 US Open they won the Young Adult Routine Division. When they competed at Liberty Swing 2014 in the Classic Division a memorable moment happened. Chris was nineteen and Nicole was seventeen when they competed with Kyle and Sarah, Jordan and Tat, and other amazing couples. The results ended up being Jordan and Tat 1st, Kyle and Sarah 2nd, and Chris and Nicole 3rd with their modified Juniors Routine! The memorable part wasn’t the placement but when Kyle told Chris and Nicole that they deserved to be up there with them.

Chris and Tara formed a partnership and danced together from late 2015 to 2018. They decided to dance their first Open just three weeks before the event! With this first time out they made finals in the Classic Division and people still recognize the hair from ‘2 Heads’. The next year as a partnership they did ‘Rise’ and placed 5th at the US Open! Chris and Tara’s third routine was met with the same success as their previous two by going on to win multiple times during each routines respective competitive season. 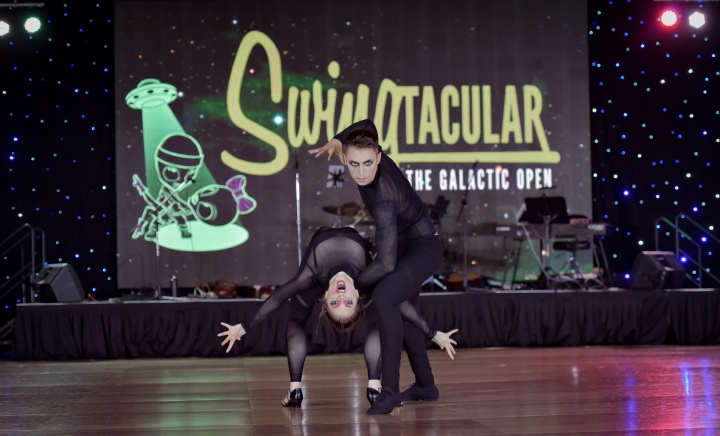 In 2019, after taking a small break from the Classic floor. Chantelle and Christopher started their partnership mid April. Chantelle is pulling double duty by also competing in Showcase with Dillon Luther. Chris and Chantelle debuted their Classic routine at Swingtacular to an overwhelming reaction from the audience. After making many alterations to that Swingtacular performance to meet the new guidelines for Swing Content, they were met with a Finals spot at the 2019 Open. Chris and Chantelle are super excited to see what the future holds for ‘bury a friend’ and the next routine they bring to the floor for 2020.

Along with picking up West Coast Swing at the Schwimmer’s Studio, Chris has trained in Latin, Ballroom, Jazz, Tap, Contemporary, Night Club, etc. as well as continuing to train in Ballet and Hip Hop.

In 2014 Christopher competed in Cabaret at the US Open utilizing the many things he learned from the Schwimmer’s Studio. With the help of Laurie Schwimmer, Chris did a Contemporary piece about the struggles of cancer. It was well received by the audience and many people came up to him afterwards thanking him for sharing this piece.

Along with dance Chris is also a musician and has been playing guitar for 9 years. He first got the idea to pick up the guitar from his dad asking, “Why not play the real thing since you are so good at Guitar Hero?” Chris immediately started teaching himself how to play and continues to progress his playing. He also is a college student studying Audio Production at Norco College finishing his first semester Fall of 2019. For more info about his music, check out the MUSIC tab on the website.

2020 marks 12 years Chris has been doing West Coast Swing. He now dances in the Champions Division on the regular and has won many contests spanning Jack ‘n’ Jill’s, Strictly’s, and Routines. Chris is excited for what the future holds for the years to come for his West Coast Swing career as well as try his best to better himself and his dancing.

photos taken by Bradford Whelan (www.bradfordwhelan.com) and Liza May (www.lizamayliza.com)